Wilderness camping in pouring rain, heavy fog and deep valleys within New England National Park, Northern NSW, allowed me to embed myself in some of the most beautiful rainforest I’ve experienced.

My brother and I spent two days in New England National Park west of Coffs Harbour exploring Weeping Rock and the Cascades Track where we’d jump off trail and wild camp along the cascades.

After walking through heavy fog and zero visibility at Point Lookout, we walked down and through to the Weeping Rock trail – a short 2km return hike from the road in.

As you approach Weeping Rock you wind your way through ancient rainforest covered in mosses, ferns, fungi and fog, finally approaching a rock tunnel.

Walking out from the rock-face and into the light, you find yourself in an incredible alcove of weeping stones, damp moss and a winding descent.

The rock faces run with freezing water and fall down on us seemingly in slow motion, the size and scale of the basalt rock faces are best described as some sort of illusion or trickery.

With a further 4km hike down to the cascades, we were pushing time to make it before night fall.

We bogged down through steep, soaking rainforest, giant ferns, a cemetery of fallen trees and scrambled over mossy boulders down to the cascades.

The hike down was hard and slow. The decline was intense. Slippery. Fallen trees from excessive rains threw us off course and had destroyed several sections of the trail.

Then we made it to the roaring cascades at the foot of the valley just on dusk, and everything was worth it. We had this place to ourselves.

We couldn’t see the trail along the rocks in the fading light. Being in a steep valley, it was getting dark fast. Then it started raining, so our plans changed and we had to hike back up the steep, wet valley sides until we could find somewhere flat enough to set camp off trail.

We found a little clearing 45 minutes back up the steep valley sides just big enough about halfway up. It was soggy with two inches of mud, but it was mostly flat (I slid down all night).

We bunked together in the tent and threw up a smaller tarp for our gear outside with M&M’s and marshmallows for tucker. It poured solid rain all night. But the next morning was worth everything to be there.

The rain had cleared and we had fantastic soft light streaming in through the valley along the cascades for most of our hike back. It was magical.

The cascades were absolutely awe inspiring, mesmerizing, and a just reward after our ridiculous night getting down.

There’s no way we would have made it down in the dark before sunrise, the night before was worth every moment we had down here with incredible light for some great photography.

This was an experience and an adventure for sure. But the magic of these places can’t be described in words, or captured in pictures. These types of experiences are only truly understood in the moment, so be sure to pack your gear and plan your next one. 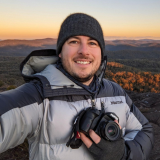 You can find more articles here on Light Hikes or view Jeremy's portfolio for more of his work.